July 4 is the date we celebrate the signing of the Declaration of Independence from England.

The Preamble to the Declaration of Independence contains some of the most powerful words ever written:

We hold these truths to be self-evident, that all men are created equal, that they are endowed by their Creator with certain unalienable rights, that among these are Life, Liberty and the Pursuit of Happiness.

It was my love of history and civics classes in junior high that led me toward the notion that law would be a way to combine my myriad interests and do something to serve the greater good, based on these and related principles.

The Declaration of Independence is about Freedom.

Freedom can mean many things and it’s often interpreted (intentionally or unintentionally) to mean the right to be selfish.

There’s a big difference between freedom to act in one’s self-interest and acting selfishly. 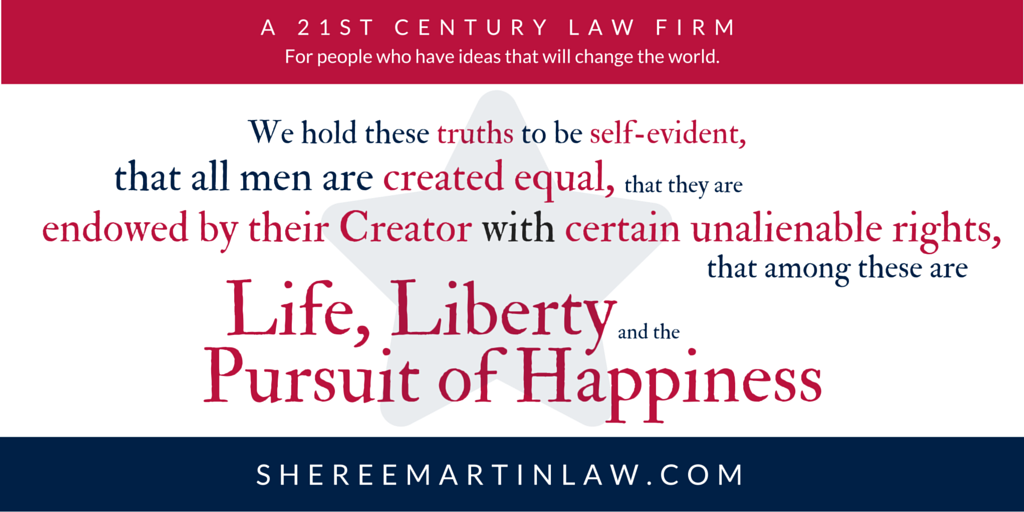 Freedom is not about the unbridled right to do everything one wants to do, without consideration for the other.

Independence is not about freedom FROM responsibility or duty.

It is enormously difficult to balance self-interest and the human desire for self-preservation with the call to be selfless and be willing to sacrifice self for the good of others.

To act in one’s self-interest, without being selfish, requires virtue.

Virtue Is A Foundation for Freedom

Adam Smith, the father of Western economic theory as we know it today, emphasized acting in one’s self interest as the basis for economic behavior and that these actions would be rational. That’s the gist of his best known work, The Wealth of Nations.

Rational self-interest only works if it’s grounded in virtue.

A few decades after the founding of the United States of America, de Tocqueville publishes his great work, On Democracy in America.

Independence—and the freedom that comes with it—requires self-control and self-direction, empowered and directed by a foundation in virtue.

Independence--and the freedom that comes with it--has virtue at its foundation, not selfish greed.Click To Tweet

De Tocqueville saw the possibility that Americans could go astray if they veered too far into the realm of self and individuality.

We can find multiple sources to explain virtue, both Christian and secular, but they all emphasize certain characteristics and values:

Honesty, Duty to Others, Self-Discipline, Civic Participation are a few examples of virtues that come up in many contexts.

Freedom requires virtue. The pursuit of self-interest is not a one-way ticket for selfish greed.Click To Tweet

In a Christian context, which is my perspective, you find the virtues expressed in many ways in Jesus’ teachings and in what the Apostle Paul describes as the Fruits of the Spirit.

Love God with all your heart, soul, mind and spirit. Love your neighbor as yourself.

This post isn’t intended to be a sermon but rather a reminder that we Americans (all of us) regardless of religious belief, have a DUTY to be more than consumers and takers in the pursuit of freedom.

As we enter into the final season of this election year, I think it would behoove Americans, as citizens in a participative and representative democracy, to consider whether the candidates we will support truly exemplify the virtues upon which our nation was founded.

Resources on Adam Smith’s The Theory of Moral Sentiments

Virtue Ethics based on Plato & Aristotle